A cold, grey October morning in 1977, standing in the breakdown lane of 195 on the bridge between Fairhaven and New Bedford, flapping my arms and sneaking sips from a pint of blackberry brandy stashed in my duffel bag. I was thumbing to New Haven, my cardboard sign said as much. Hitchhiking was still a thing in the mid-70s and I enjoyed the random characters I  got to meet. But that morning, as the cars and trucks whizzed past me, I started to sing: “Black Throated Wind”

“But I’m here by the road
Bound to the load
That I picked up in ten thousand cafes and bars
Alone with the rush of the drivers who won’t pick me up
The highway, the moon, the clouds, and the stars”

I was 19. I was full of self-pity and romantic sadness. My home was broken, my parents were in the process of divorcing, I had just dodged expulsion for an act of drunken mayhem, and I was hitchhiking to save the cash it would have cost to ride the bus back to a college I couldn’t afford to attend.

Twenty years later I sat at a table at Farley’s, a coffee shop on Potrero Hill in San Francisco, across from the poet who wrote those words and told him about that grey morning. I told him the song was one of my favorites and he approved. 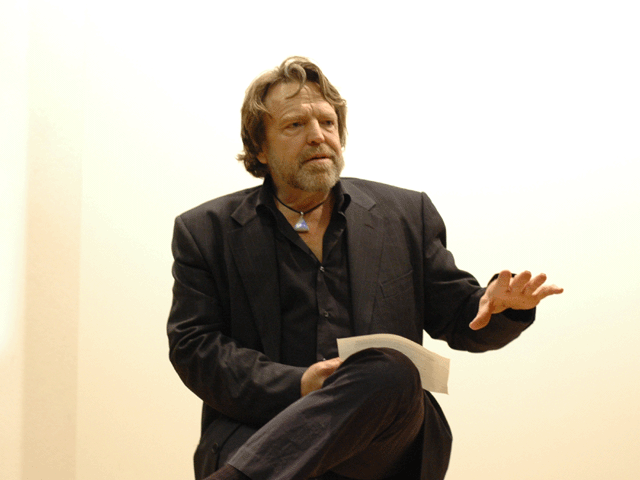 He was John Perry Barlow. He smiled through his beard, cowboy’s crowfeet making his eyes gleam like stars, and wryly said, “Sounds like your moment of satori.”

Yesterday I learned he was dead.

John Perry Barlow was a gleeful paradox of hippy enlightenment, Wyoming GOP libertarianism,  and digerati celebrity. We met online at the W.E.L.L. in the late 80s when I was covering tech for Forbes and still going to lots of Grateful Dead shows. The W.E.L.L. felt like a small community of great minds and Barlow was one of its most enthusiastic voices, maintaining a certain humility but mensch-like sang froid in an ethereal world he dubbed “cyberspace.” His zeal for the online realm of words and thought carried through to the founding of the Electronic Frontier Foundation, and he pulled no punches in declaring the online world to be free from the sovereign censorship of governments or corporations.

I laughed at him backstage at a Grateful Dead show at Stanford’s idyllic Frost Amphitheater one May in 1988 as he tried to hit on my wife Daphne who was oblivious to his leering glances. He wore a flamboyant cowboy hat with some sort of added feather-like flair and I repeated the old line about cowboy hats and hemorrhoids to him (sooner or later every asshole gets one) when I has a chance to introduce him to Daphne.  I gave him a sober-up pep talk at the Rock and Roll Hall of Fame in Cleveland before he went on stage at a Forbes CIO conference and told a baffled audience of corporate nerds in a rambling disquisition that they were a clueless pack of assholes determined to turn his beloved cyberspace into a cesspool of censorship.  I begged off his offer to join the staff of the EFF but stayed in touch, seeking him out for some face time whenever I was in San Francisco or he was in NYC. As his health declined in a recent years we lost touch, but this morning, on the train to Boston, I took great comfort listening to playlist of his songs that will always live on.